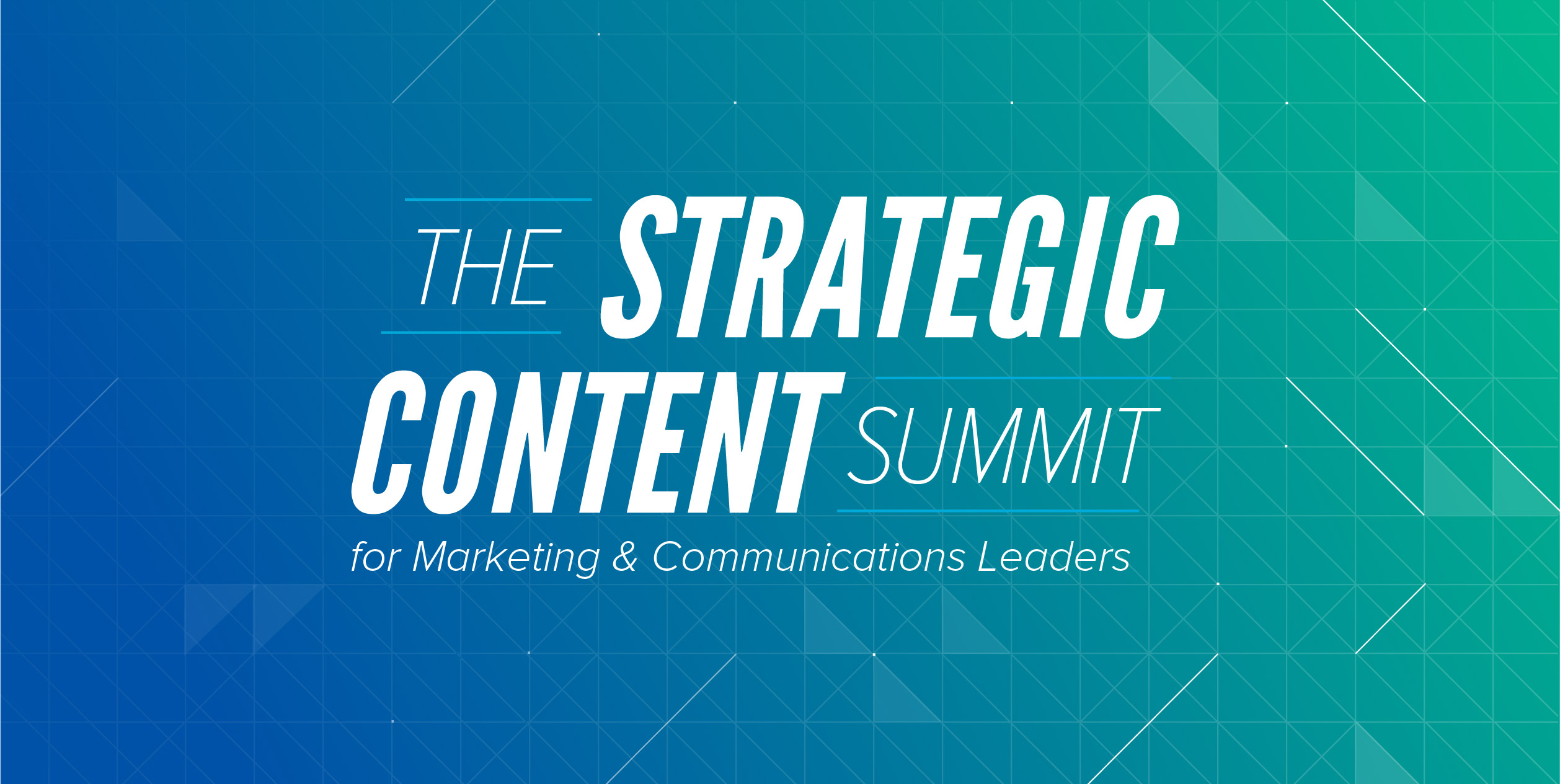 From YouTube to TikTok, interactive landing pages to virtual reality experiences, visual storytelling and video content now dominate the vast majority of our interactions. Marketing and communications leaders aren’t just challenged to develop compelling content in this dynamic new era — they’re also looking for a way to drive their content marketing strategy forward in an era of massive change and uncertainty. The Strategic Content Summit is a weekly webinar series featuring some of the world’s most innovative marketers, design leaders, futurists, and visual communication strategists — all gathered to answer one question: what does the strategic content of the future look like, and how can brands make the leap to get there?

Join series host Amy Balliett, CEO and founder of Killer Visual Strategies, every Tuesday at 10 a.m. PT / 1 p.m. ET to discuss the most critical content strategy questions of our time with such dynamic guests as Brian Fanzo, Marcus Lee, Scott Berkun, and Matt Heinz. Walk away with the skills and strategies you need to effect real change within your organization — and position your brand at the forefront of the visual content era / visual content innovators / visual storytelling and content strategy innovation.

Check out the full summit agenda below and sign up for any and all sessions that interest you most — all attendance is free!

It’s more challenging than ever for brands to cultivate their audiences’ trust. One of the most powerful ways to build that connection is by telling your story. What does your brand value and why? How are you making the world a better place? And how will you work to give them a personalized, human experience?

Digital marketing futurist and keynote speaker Brian Fanzo will explain how organizations can use visual marketing content — from virtual webinar tools and video to illustration and animation — to engage their audiences. He’ll also talk with host Amy Balliett about how to make this content feel more authentic and drive real connection.

Harnessing the Power of Motion Graphics

By 2022, 82% of all web traffic will be video. It’s a resounding testament to the power of this medium, but not all videos can deliver great engagement. The most effective videos embrace the power of story — whether they take us on a trip to the moon, share compelling data visualizations, or explain the complexities of cell division.

And in fact, motion graphics are uniquely equipped to tell memorable stories — to make the complex comprehensible, and to make data beautiful. They live outside the limitations of time and space, beyond what can be filmed, and instead are limited only by what we can imagine.

LinkedIn is one of the most powerful platforms for building brand awareness, establishing authority in your industry, and driving business growth. Yet many organizations aren’t developing the kinds of marketing content that LinkedIn users respond to most: video.

Shaw Rowbottom is a LinkedIn influencer whose videos have generated more than 20 million views on LinkedIn. Join Shay in conversation with Killer Visual Strategies CEO Amy Balliett to learn how Shay has helped her clients generate millions of dollars in sales by improving their content marketing strategy on this essential platform.

The Case for Irrationality & Why You Need a Zero-Revenue Plan

Rational thought maintains the status quo. But in an era — and a year — when change happens faster than ever, rationality doesn’t cut it. Big, transformational outcomes that disrupt industries and change the world (or at least save your company) require irrational thought. Crazy thinking has transformed the world over and over for millenia, and we need it now more than ever.

Ben Gaddis, author of Embracing Irrationality: How Crazy Thinking Can Save Your Career, Your Company, and Possibly the World, explains why every company should interrogate their core beliefs, identify the constants they’re overrelying on, and work toward an irrational vision of tomorrow to remain competitive and develop innovative content. He’ll also guide you toward developing a Zero-Revenue Plan — because while you can’t control the external factors, you can control how you prepare for these suddenly not-so-far-fetched catastrophic scenarios.

Where Brand Strategy & Identity Fit Within Your Content Lifecycle

Your brand strategy defines your goals and values as a company, and your brand identity brings that strategy to life visually. But how should these documents impact and inform the content you produce on a daily basis — both for marketing and internal comms?

Join Paul Parkin, founder and creative director of Salt Branding, in conversation with visual communication thought leader Amy Balliett to learn how to create content that aligns with your brand strategy and stays true to your brand identity.

Telling Your Sustainability Story in a Post-Pandemic World

Before COVID-19, the market for sustainable goods boasted revenue of $2.65 trillion with another $1 trillion in market opportunity for brands that could communicate their sustainability attributes clearly. In the coming months, and even years, we will see a new surge of sustainable businesses that’s greater than we’ve ever seen. Why? Because the market is wide open for products and services that can provide positive social and health impacts, economic and environmental resiliency and brand loyalty. That’s sustainable business.

Join Carolyn Parrs, CEO of Mind Over Markets, in conversation with Killer Visual Strategies CEO Amy Balliett for this eye-opening session. Whether your business is actively integrating sustainability communications into your business strategy, you’ll walk away with new insights and proven strategies that you can take back to your team for immediate implementation.

How to Develop a Content Marketing Strategy That Drives Results

High-quality, results-driven marketing content is the primary means by which today’s most successful organizations build brand awareness and develop qualified leads for their sales teams. But in many organizations, marketing and sales teams aren’t in clear alignment on how they’ll manage the conversion funnel, or even on what their unified goals are.

Join Matt Heinz, a marketing innovator and author, in conversation with CEO and author Amy Balliett about how marketers and sales departments can develop a content strategy that drives steady growth for their organizations.

About Amy Balliett, Your Series Host

Amy Balliett is the CEO and founder of award-winning visual communication agency Killer Visual Strategies. She owned her first company, a candy store and ice cream parlor, at the age of 17 before subsequently building a successful career in SEO and content marketing.

In 2010, she founded Killer Visual Strategies — then called Killer Infographics. In the years since, she has grown Killer to become the leader in its industry, driving visual strategy and campaigns for such global brands as Microsoft, Boeing, Adobe, Nikon, Starbucks, the National Endowment for the Arts, and the United Nations. Killer has been named to the Inc. 5000, a list of the nation’s fastest-growing private companies, for four years in a row.

Considered an expert in her field, Balliett has spoken at more than 175 conferences around the glove, including SXSW, Content Marketing World, Adobe MAX, and SMX Advanced. She is also an Inc.com columnist, a teacher at the School of Visual Concepts, a guest lecturer at the University of Washington, and a LinkedIn Learning instructor. Her book, Killer Visual Strategies: Engage Any Audience, Improve Comprehension, and Get Amazing Results Using Visual Communication, was released on June 30.

For the first time, there is now a comprehensive guide to designing quality visual communication content. This book, written by Killer Visual Strategies CEO and founder Amy Balliett, will prove essential to marketers, internal comms pros, and designers alike. That’s because it doesn’t just outline the history and the science behind visual communication — it also offers up fundamental best practices, outlines common mistakes, and even explains how to manage a visual communication project.

The Strategic Content Summit kicked off on June 30 with bestselling author Scott Berkun. Explore the sessions we’ve featured in the Summit so far below, and click through to view a recording of each session.

Organizations that put design first can triple their annual revenue growth. But not all design is created equal. Our lives are now oversaturated with visual content, from social media platforms to streaming television networks to GIFs and memes. It’s more necessary than ever that brands embrace quality, custom design so they can stand out from the competition.

In this webinar, you’ll learn strategies for recognizing quality design and develop high-engagement content for your organization. This event unites the authors of two dynamite new books on design and visual communication for audiences who aren’t just designers, but marketers, brand leaders, and communications professionals. Scott Berkun, author of How Design Makes the World, will be interviewed by Strategic Content Summit host Amy Balliett, author of Killer Visual Strategies: Engage Any Audience, Improve Comprehension, and Get Amazing Results Using Visual Communication.

Strong insights design makes information clear, resonant, and actionable. It shapes compelling visual narratives and helps organizations recognize patterns and opportunities to solve business problems. But how can you speak visually in a way that feels resonant to your internal stakeholders? And why does design matter when it comes to building trust and authority with those audiences?

Join Marcus Lee, vice president of design for innovative insights firm LRW, in conversation with Amy Balliett to learn how you can develop data- and insights-powered reports and presentations that engage stakeholders and drive business growth.