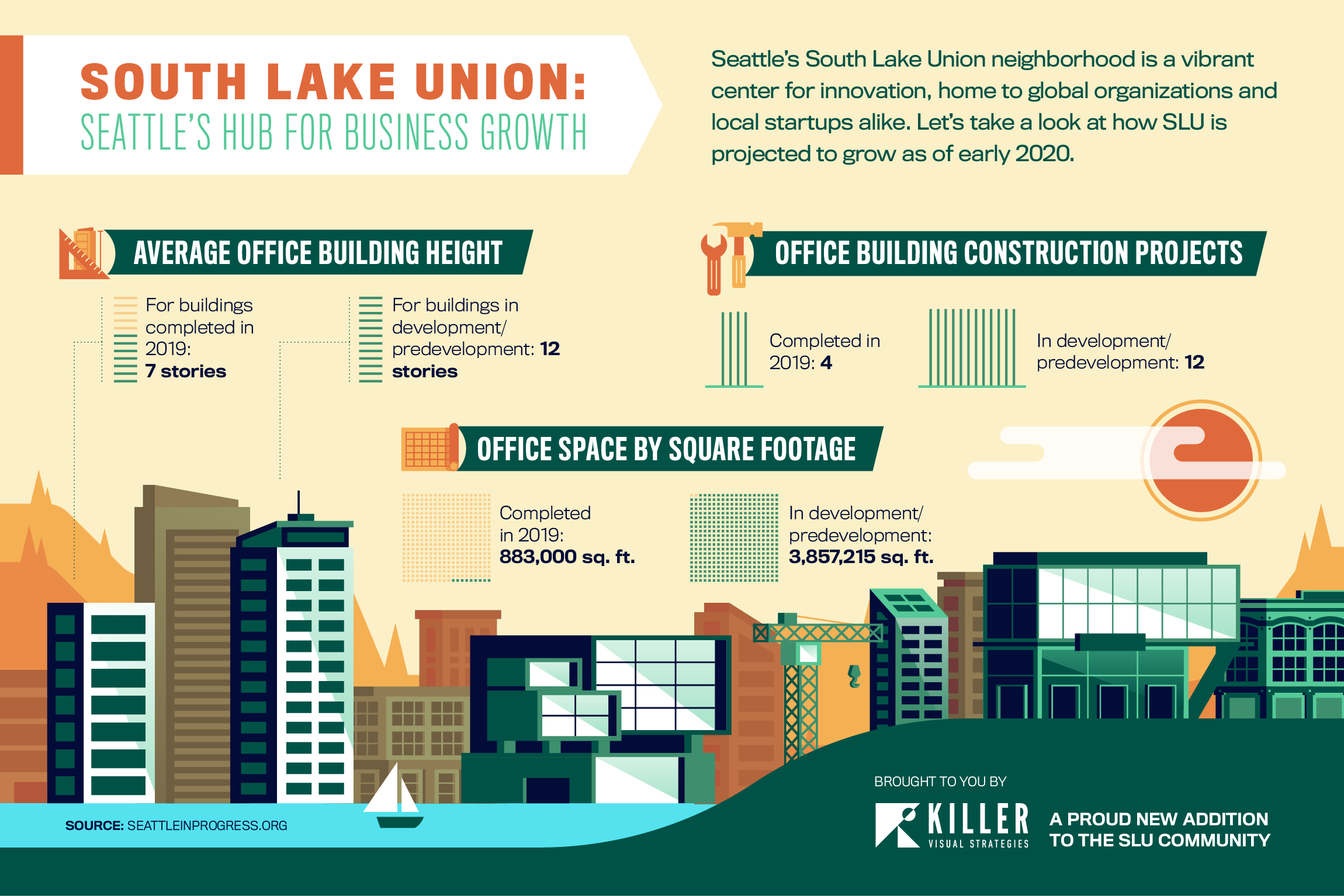 It’s been nearly a month since visual communication agency Killer Visual Strategies moved into our South Lake Union office, and the new neighborhood is already exceeding all our expectations. As a visual communication design company specializing in everything from motion graphics to infographics to interactive sites, we’ve found the innovative and energetic atmosphere in SLU to be the perfect fit. So, to celebrate our new digs, we put together the mini-infographic above. It’s about one of SLU’s defining features: its meteoric growth.

Seattle is leading the country in the number of cranes you can see dotting its skyline. In fact, by last estimates, there were 59 — 15 more than the city with the second-most cranes.

But this is just one element of the construction boom we’ve been experiencing over the past several years. And a lot of that boom has been driven by an impressive amount of business growth.

Nowhere is this growth more evident than when you’re walking down any given sidewalk in South Lake Union. The investments of international corporations such as Google and Amazon, alongside the emergence of innovative local startups, have driven an atmosphere of excitement and energy here. Alongside them, a wealth of dining and entertainment options have popped up — and these have been keeping our team at Killer very busy!

The Journey of a Visual Communication Design Company

The Killer team at a Mariners game

Killer Visual Strategies was founded in 2010 under the name Killer Infographics, and quickly grew as one of the nation’s first design companies to specialize in visual communication. That is to say, our focus wasn’t just on producing beautiful visual content (though we do that, too!). Rather, the accurate communication of visual information was tantamount to our mission. For today’s organizations, building trust with their audiences is key, and you can’t build trust without being open and precise in every piece of visual content you produce.

Killer CEO and co-founder Amy Balliett soon emerged as a leading public and corporate guest speaker on visual communication. She has appeared at such events as SXSW and Adobe MAX for several years in a row. Meanwhile, the Killer team has had a chance to work with such Fortune 1000 companies as Amazon, Boeing, the Discovery Channel, Edwards Lifesciences Corporation, and Microsoft. We have also been named an Inc. 5000 company for four years running.

Now, with our ten-year anniversary approaching, the move to South Lake Union feels like a natural next step. Our company has built a team of designers, project managers, writers, researchers, and animators who are next to none when it comes to visual communication design. We’ve gotten the opportunity to work with many of the organizations we admire most, and to give back to our community by donating more than $4.5 million in services to nonprofits since 2010. South Lake Union is a place where we can take the next step in our growth as a company. 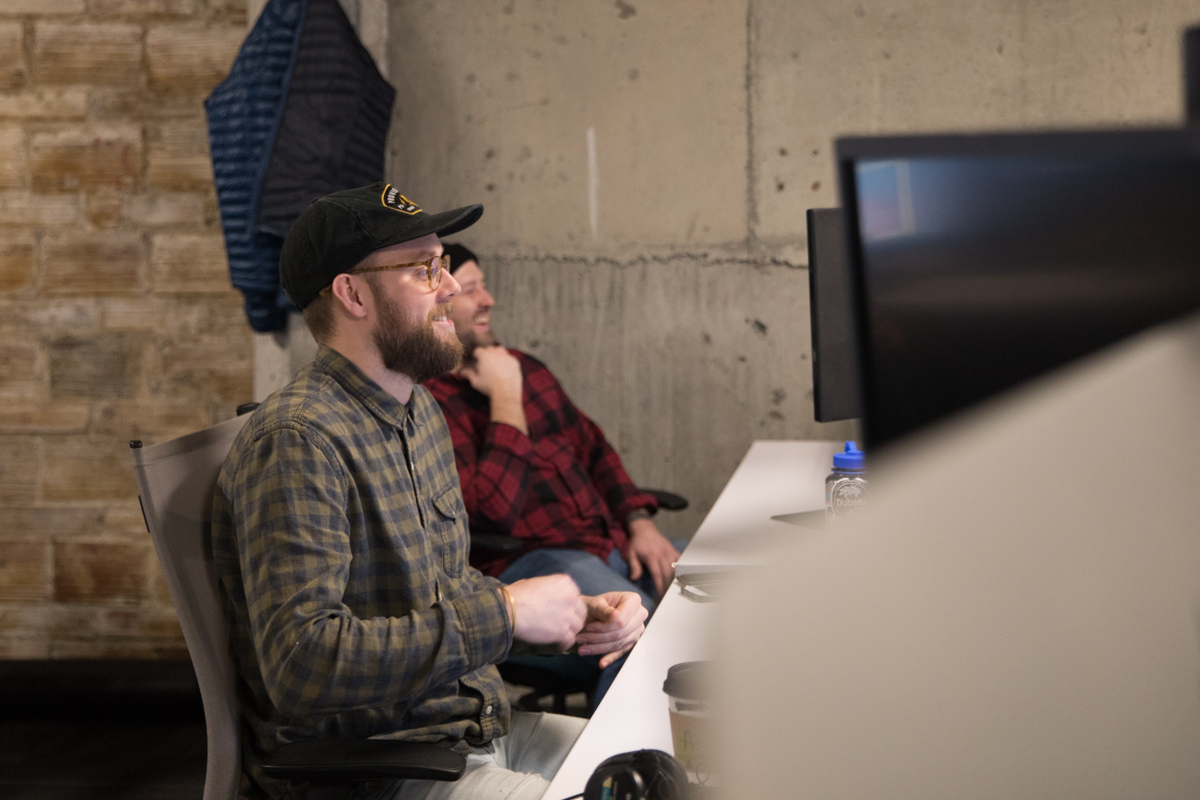 The Killer team in our new office

An Infographic Design in Honor of SLU

So take the chance to enjoy the mini-infographic above, created to honor and celebrate our new neighborhood. More than half our team worked together to make this design a reality. We wanted it to reflect the spirit of hope, inspiration, and innovation that SLU embodies.

But — as has always been the mission of our company — we also wanted the infographic design to convey information that might be truly useful to viewers. Or, if not useful, at least fascinating! It was certainly an interesting journey for us to learn more about SLU construction, including a few stats we weren’t aware of. We’ve shared what we found most surprising above.

Thanks, SLU, for welcoming us to the neighborhood. We can’t wait for what comes next!

Erin McCoy is director of content marketing and public relations at Killer Visual Strategies. She earned her BA in Spanish with minors in French and Russian, and holds 2 master’s degrees from the University of Washington: an MFA in creative writing and an MA in Hispanic literature. She has won nearly 2 dozen awards in photojournalism, and has dedicated those skills to boosting Killer’s brand recognition and thought leadership in visual communication. Since Erin took on her marketing/PR role, Killer has been named a member of the Inc. 5000 for 4 years in a row; has been featured in such publications as Inc., Forbes, Mashable, and the Huffington Post; and has been invited to present at such conferences as SXSW and SMX Advanced.